How To Catch Tuna – FAQ’s

What is the minimum legal size of a Bluefin Tuna you can keep?

A: no minimum (Victoria)

A: 2 per angler and not more than a total weight of 160kg (Victoria)

What is the lifespan of a Southern Bluefin Tuna?

What is the scientific name of a southern bluefin tuna?

A: Thunnus maccoyii and Thunnus spp.

How To Catch Southern Bluefin Tuna

The Southern Bluefin Tuna have a torpedo shaped body, dark blue backs and a silver belly. The fins and finlets can have a yellow tone with black edges and the dorsal fin has a blueish tone, hence the name “Bluefin”.

You will find the bluefin around the Atlantic, Pacific and Indian Oceans. They travel long distances and are highly migratory. They can be found in depths of up to 500 metres.

How to Find Tuna?

Let’s look at how to find Southern Bluefin Tuna. If you’re in luck, you might see birds diving into water where there are large schools.  So, the first clue in how to catch tuna is to keep a lookout for diving birds which are natural predators to the southern bluefin. The second clue in how to catch tuna is to lookout for patches of ruffled water on a calm day. This ruffled water can actually be schools of tuna swimming near the surface. We also look out for debris, current lines and essentially anything that is out of the ordinary. Subtle clues can at times point to hundreds and even thousands of fish. Once found, the fun begins with rods buckled over as the reels begin to scream and lines are pulled off the reel, really fast. This makes for an exciting trip. 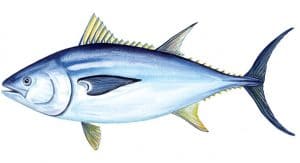 What Tackle to Use for Tuna Fishing?

We mostly troll lures to locate and catch these blue bullets. We have found this to be the best way by a country mile. Trolling lets you cover vast areas in search of these fish and often on a hard day on the water, you will still rustle up at least a few Southern Bluefin Tuna. The lures we typically use are either skirted lures or Rapala lures (see below). 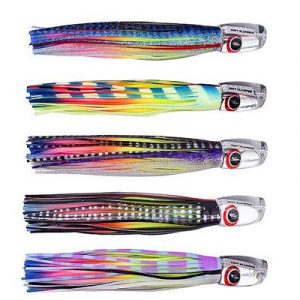 Trolling is one of the most effective methods of fishing to catch tuna. To put it simply, trolling is a fishing technique that works by dragging a hooked lure or bait through the water behind a moving boat. We often place multiple lines in the water, using the same principle – we’re trying to trick the fish into thinking that your bait or lure is moving prey. 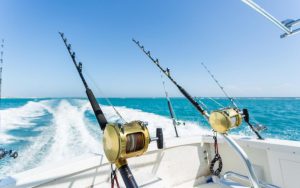 We also create opportunities for those who enjoy casting lures at the schools of tuna, which is another great way of catching them. We also use a technique called “Cubing”. Cubing involves cutting small cubes of pilchards or bait and dropping them overboard piece by piece, not to feed them, but to draw them closer to the boat. You can watch them flying past, picking the cubes you are dropping in. The next step is to drop in cubes attached to a hook and line and then free spool. Get ready to hang on! It’s really so much fun cubing for tuna.

Bluefin tuna can bite at any time of the day, although they are generally most active early morning or late afternoon. That said, if you can locate schools of fish just ‘sunbaking’ or basically treading water during middle of the day and not actively feeding, then trolling lures past their noses will often wake them up.

How To Catch Tuna – Pro Techniques

It’s best to troll at speeds of 8 knots using skirts and hard bodied divers as the lures of choice. The weather conditions will determine on how to set up a lure pattern. At times, using outriggers will help avoid tangles and present the lures well.

I have found that when deep divers (lures) are set close, they tend to track straight, while skirts (lures) are best deployed further back, several pressure waves behind the boat. There are no firm rules here and some crews swear by a shallow diving minnow way out the back and even setting a skirt well behind the boat to target any fish following at a distance. Swapping lure colours, sizes and diving depths around is something you can do all day long, and it can pay to mix it up until you find a bite pattern for the day.

The lure sizes for targeting bluefin from 5-30kg are minnows (bibbed and bibbless) anywhere from 10-20cm or skirts up to 20 cm. I try to fit all our hard body lures with single hooks for easy release of fish, and for the safety of all aboard, as I have found that multiple hooks combined with a thrashing bluefin is really asking for trouble.

Thanks for reading our article, How To Catch Tuna – Pro Fishing Tips. We hope you enjoyed it.
Bookings can be made here: Bookings
Fishing data obtained from Victorian Fishing Authority